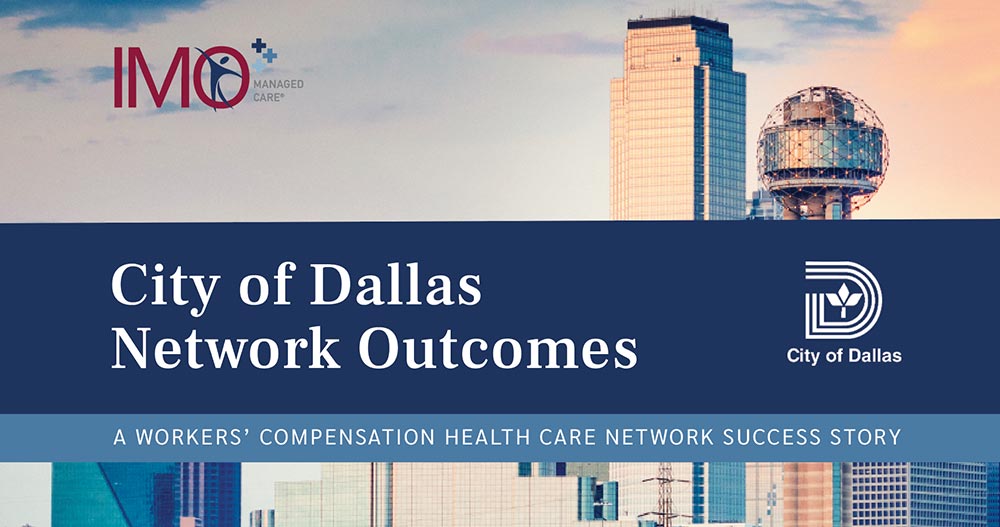 The Office of Risk Management at the City of Dallas states that its mission is to collectively work together ‘to provide a safe and healthy environment for the City’s greatest resource; our employees.’ Led by Director of Risk Management, Zeronda Smith, the workers’ compensation section is a solid cornerstone of that mission.

In partnership with Injury Management Organization (IMO), it administers the “IMO Med-Select Network” (a 1305 Health Care Network with managed care services) injury claims and develops strategies to ensure that injured employees return to safe and productive employment as promptly as medically feasible. This article takes us on the city’s successful path of taking care of its own with cost-effective and compassionate return-to-work strategies.

When asked about IMO’s relationship with City of Dallas, the company’s President, Catherine Benavidez says that one reason for the successful partnership, is they both share a similar philosophy. “The Mission of IMO, now 30 years in business, is to take care of its people and serve them with the best quality medical care and superior customer service. Our Health Care Network has partnered with the City of Dallas for the past 12 years. The IMO Med-Select Network is organically grown, has highly credible results, and is built for performance. I am proud of the work our extraordinary managed-care team has done with such a great City!” 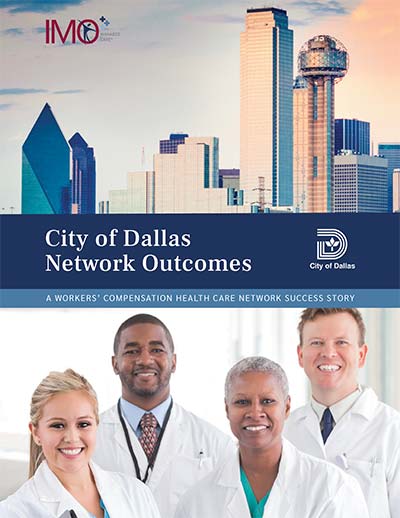 Dallas, with a population of more than 1.3 million residents, is the third most populated city in Texas, and the ninth in the United States. With an operating budget of $3.6 billion and 13,000 employees, the City of Dallas ensures that all vital aspects of the city’s daily functioning continue to operate smoothly. These employees range from first responders like police officers and fire-rescue officers, to librarians, road-repair engineers, and building inspectors.

Many of these jobs pose extraordinary risks, even with the city’s top-notch safety measures. When those injuries occur, the city’s workers’ compensation section locks arms with the IMO health care network to channel the most appropriate medical services and recovery strategies that promote early recovery and effective return-to-work for those injured employees.

The results speak for themselves. The 2020 Texas Department of Insurance (TDI) report on Return-to-Work results show that on average, Texas injured employees lose 43 workdays (24 days median) as a result of their injuries. However, the average lost workdays result is an amazing 6.03 Days for FY2020 for the City of Dallas. The injured employee remains productive back to work due to the early intervention of managed care while in a Health Care Network.

While year-to-year medical cost comparisons are not available through TDI’s network report card (the key results are based on six months of post-injury services), the 2020 report shows that IMO’s lost-time claims (including City of Dallas injured employees) had the lowest average medical cost in the state. The FY2020 for City of Dallas is $2,232, significantly below the agreed $3,592 threshold set with IMO. The IMO Telephonic Medical Case Managers and the effective medical panel choice with the full spectrum of provider relations and performance is the root cause of great medical cost results.

Finally, the Performance Based Oversight results at TDI highlight the performance record of the IMO-City of Dallas partnership as one based on quality. IMO’s clients, including City of Dallas, scored an average of 98.4 percent on TDI’s list. IMO’s history with City of Dallas is one of ensuring quality and cost-effective care for the city’s injured employees.

How many injuries does the City of Dallas have?

The City of Dallas and the IMO health care network managed an average of about 1,300 injuries annually over the past five years (a total of 6,603). The number of injuries referred to the network decreased slightly in 2017 but increased moderately during the 2018-2020 years (see Figure 1). Among the injuries in 2020 were 158 Covid-19 claims. Without these Covid-19 claims, the City of Dallas would have had a slight decrease in the total number of claims from 2019. 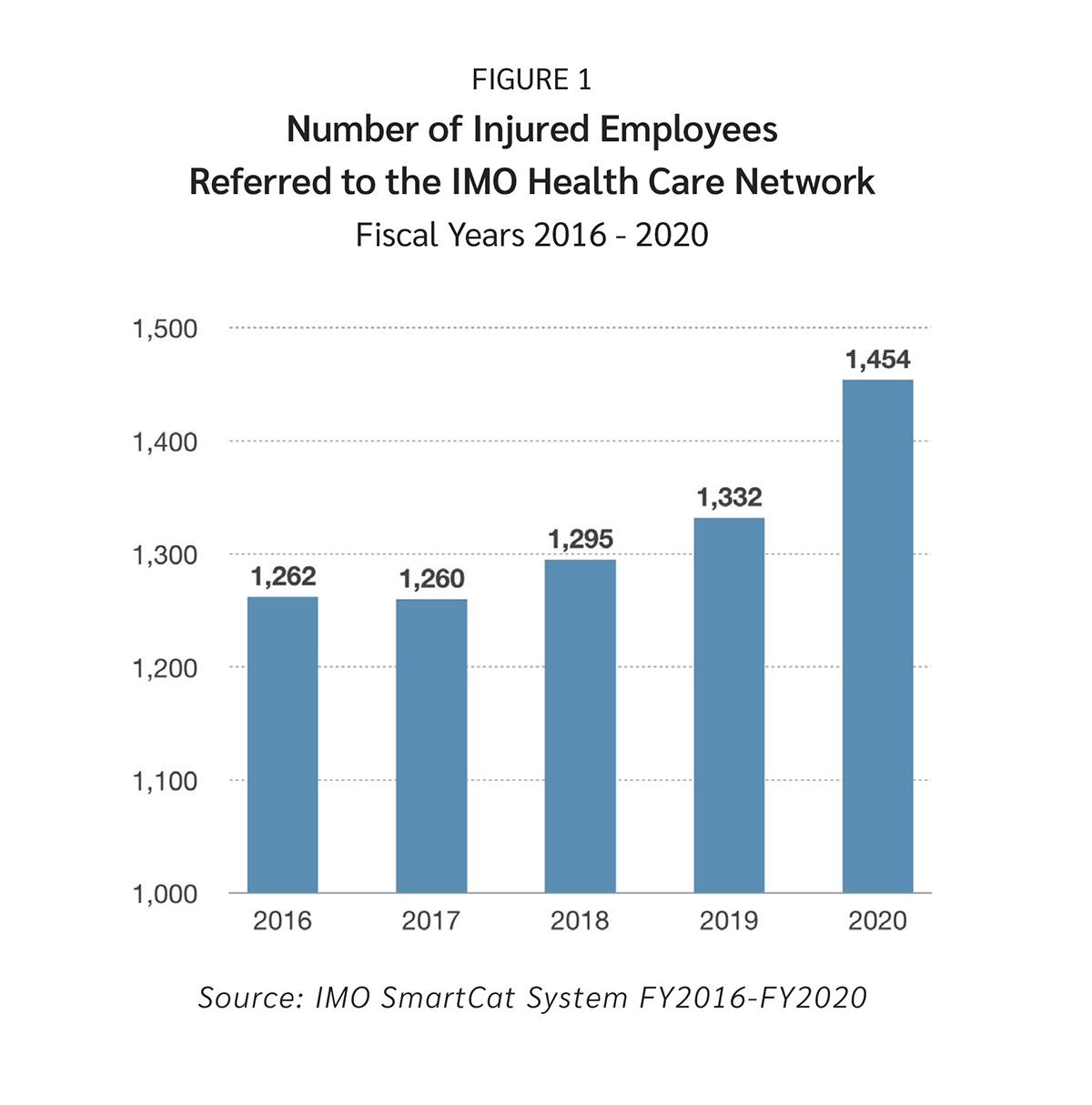 What kinds of injuries?

Sprains, strains, and contusions comprise 54 percent of the injuries suffered by employees of the City of Dallas. Other injuries include fractures, lacerations, and crushes. However, about 14 of these injuries were from gunshots. The City of Dallas and IMO produced an article on the story of a Dallas police officer who survived a life-altering gun attack while on duty. The article, City of Dallas Taking Care of Its Own – A Case Study in Courage, recounts the bravery and inspirational recovery of Police Officer Crystal Almeida.

Sadly, her partner in uniform, Police Officer Rogelio Santander, died from his injuries. First-responders everywhere face daily risks on their jobs, and, unfortunately, those employed by the City of Dallas are no exception.

How many medical services are provided to injured City of Dallas employees?

Injured employees receive a range of medical services to treat their injuries. In addition to diagnostic services that evaluate the severity of injuries, medical doctors may conduct surgeries, prescribe pharmaceuticals, and refer injured employees to specialists or facilities for more focused services. Medical services generated an average of about 16,000 doctor bills annually, a total of 81,360 bills from 2016 to 2020 (see Figure 2). 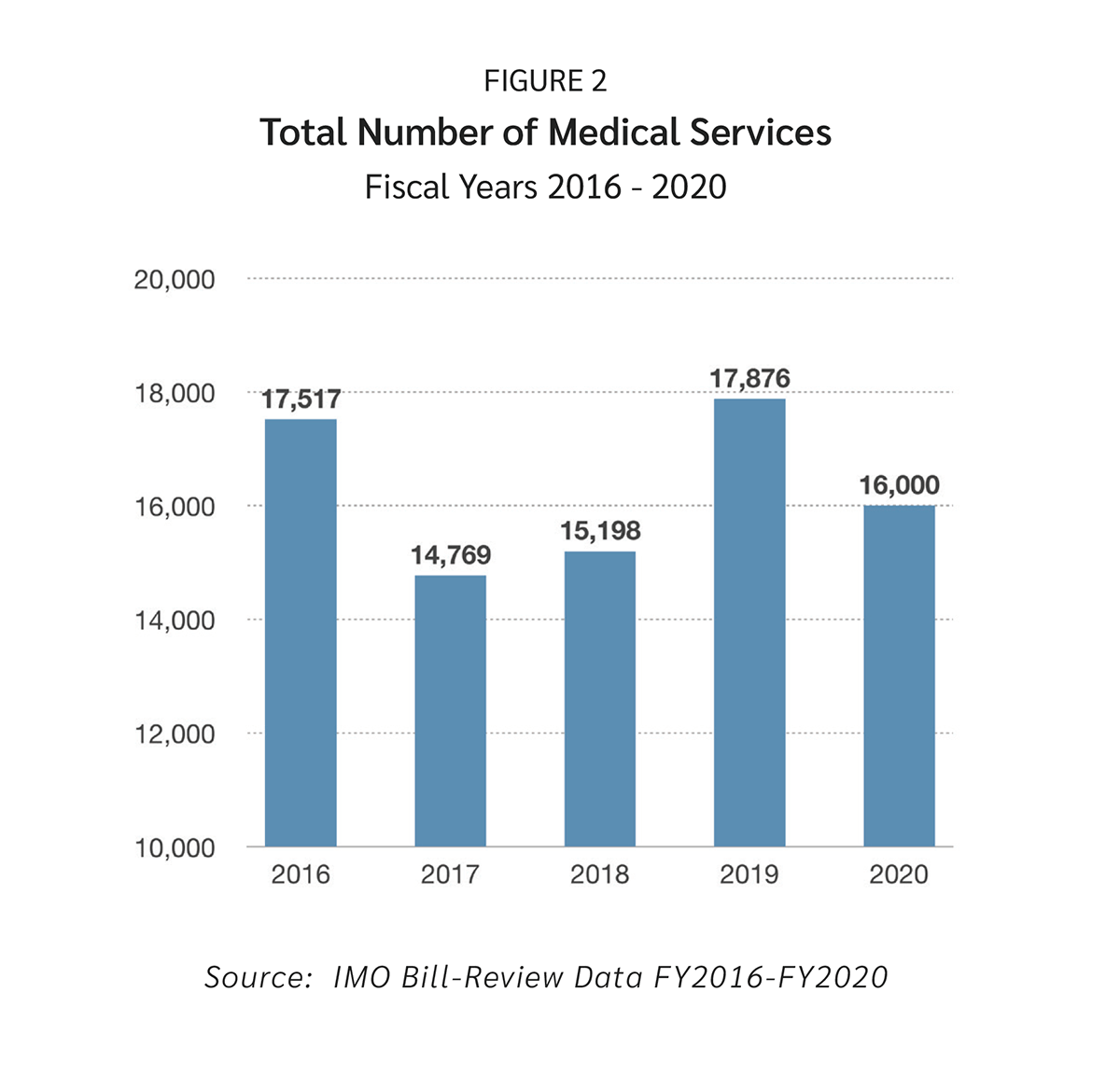 How much do injuries cost the City of Dallas?

Injuries cost the city in two primary ways: income-benefits paid to injured employees for their lost-time from work, and medical cost for the doctor, hospital, and pharmaceutical services needed to treat those injured employees.

During the fiscal years 2016–2020, a total of 2,890 IMO-contracted doctors, representing 22 different specialties, treated injured employees from the City of Dallas. Their medical services generated 81,360 bills and totaled more than $111 million in doctor charges during the last five years (see Figure 3). 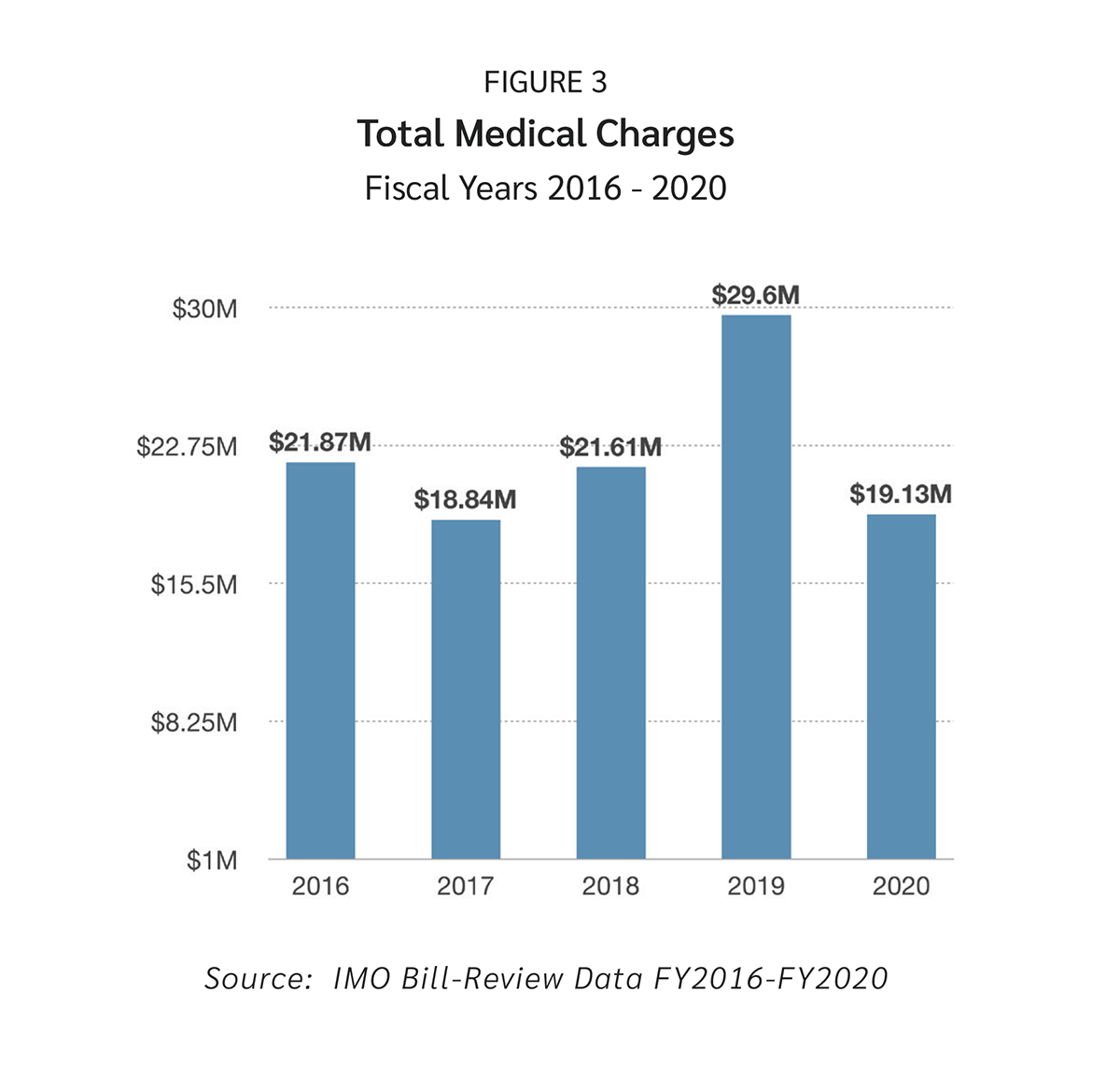 Sometimes, a few catastrophic cases can add significant costs to the totals. For example, in the 2019 totals above ($29.6 million), two catastrophic cases accounted for $7 million, 24 percent of the total amount billed for that year. Fortunately, the long-term partnership between the City of Dallas and IMO is equally committed to saving taxpayers’ dollars, as it is in delivering quality medical care to injured employees. The IMO Med-Select network carefully selects the providers through an extensive nomination process and works collaboratively with the medical providers to ensure provider performance while following evidence-based guidelines.

From 2016 to 2020, IMO’s integrated review processes reduced the amount doctors charged by about $68 million due to fee corrections. IMO further reduced the costs by $10 million in duplicate billings and $2 million in preauthorization denials due to lack of medical necessity according to evidence-based practices. All told, IMO avoided about $80 million in medical billings and an additional $0.4 million in network savings (see Figure 4). 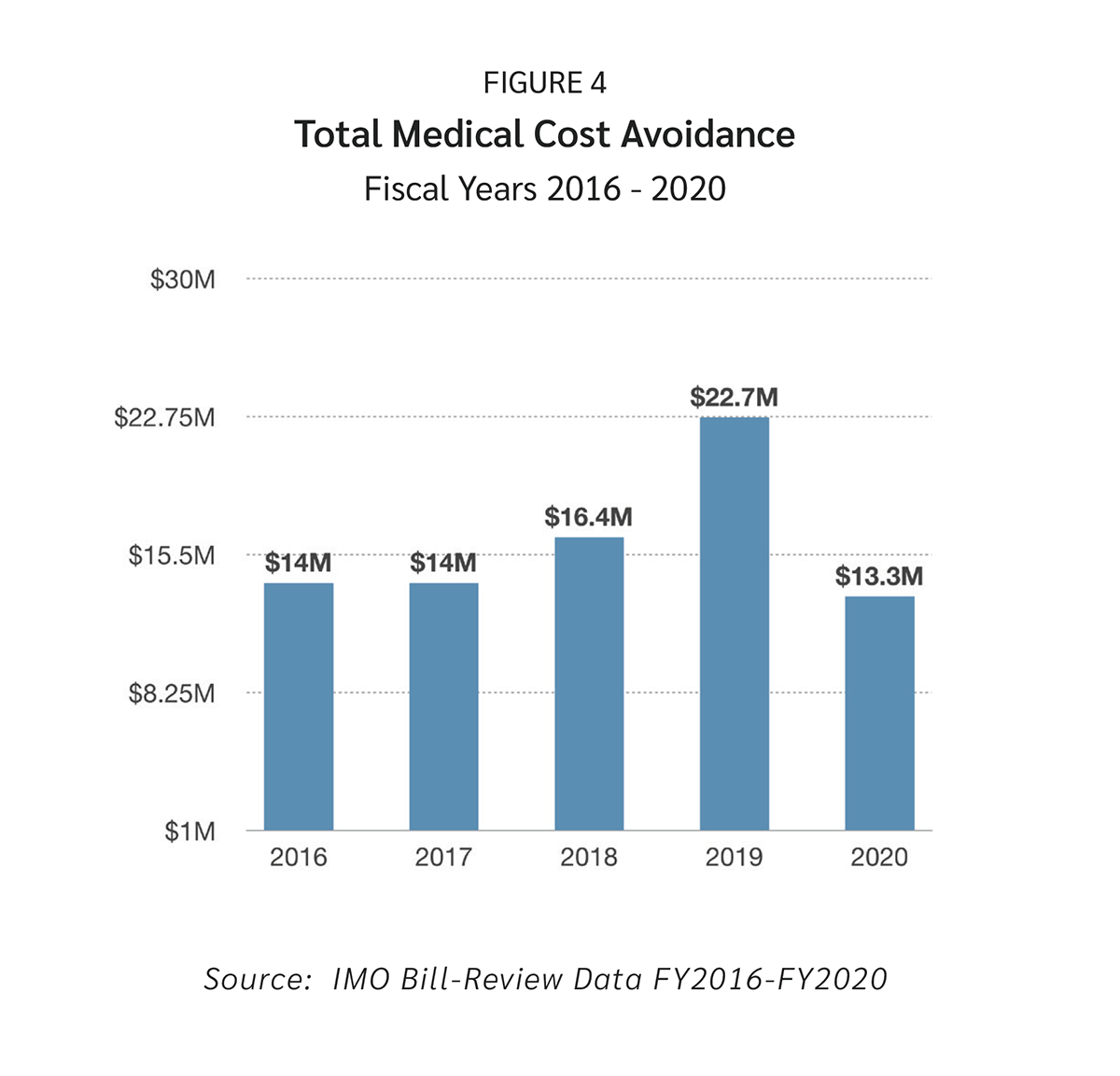 Overall, during the past five years, City of Dallas had more than 6,600 injuries, which generated $111 million in medical billings. However, IMO’s cost containment measures reduced the allowed payments to $30.6 million, creating a total cost avoidance of $80.4 million for the City of Dallas (see Figure 5). 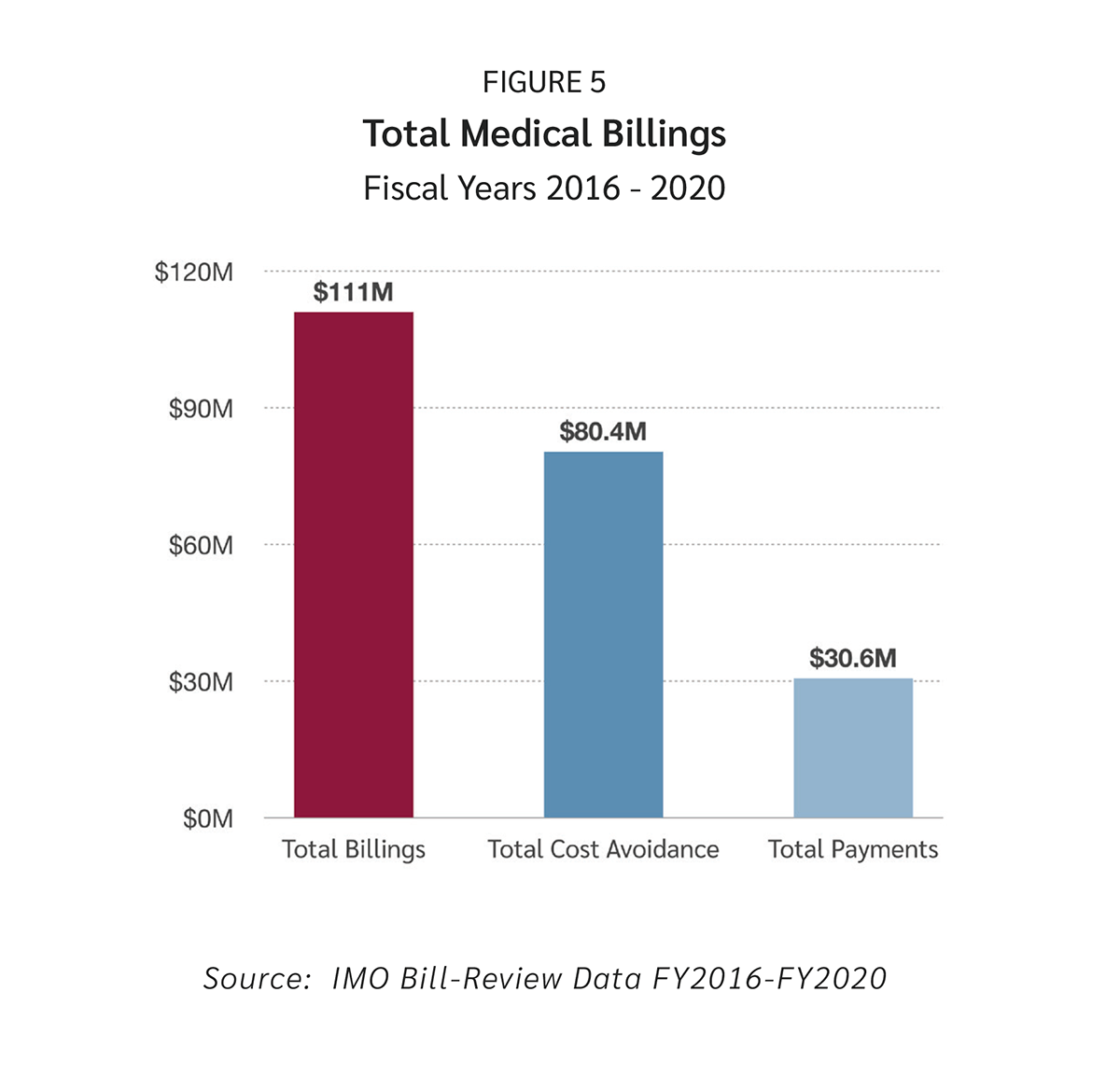 The Office of Risk Management, in partnership with IMO, succeeds in taking care of injured employees by providing cost-effective, quality care with quality providers, and working with a superior Health Care Network Team. We are steadfast in our partnership mission to provide a safe and productive return-to-work experience to our injured employees. The City of Dallas believes in taking care of its greatest asset, the employees.

View this report as a PDF
Download PDF
Previous
Next

Are You Prepared for the Coming Silver Tsunami?