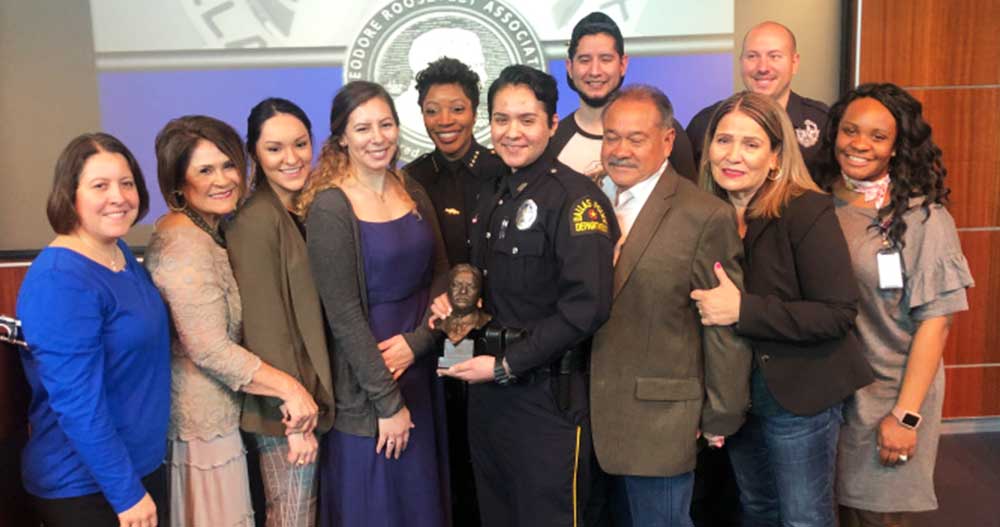 On April 11, 2019, in a packed room at the Jack Evans Police Headquarters, Dallas police officer Crystal Almeida received the Theodore Roosevelt Police Award to thunderous applause from family, friends, and fellow police officers.  But less than twelve months earlier, and just twelve miles away, the 27-year-old was lying unconscious in another packed room. On this day, April 24, 2018, she was in the Presbyterian Hospital intensive care unit, filled with doctors and nurses struggling to save her life from near-fatal gunshots to her face and head.

The Theodore Roosevelt Police Award is given to hometown heroes like Officer Almeida, who return to serve their communities with honor after surviving serious injuries. Her comrades are still astounded how she was able to return to work within three months. Clearly, she is an extraordinarily brave and tenacious police officer, from a family with proud law-enforcement traditions, and with a love for helping people. 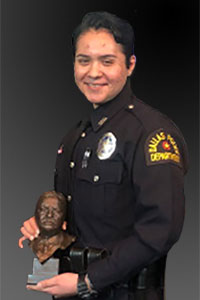 Her words speak volumes about the depth of her commitment to service. "After that day, my old life was put on hold, after waking up from what seems like an eternity, the thing I remember is asking how everyone was doing and wanting to get back to work."

Getting injured employees back to safe and meaningful employment is a key goal at the City of Dallas. The Office of Risk Management at the City of Dallas states that its mission is to collectively work together ‘to provide a safe and healthy environment for the City’s greatest resource; our employees.’ Led by Director of Risk Management, Zeronda Smith, the workers’ compensation section is a solid cornerstone of that mission. In partnership with Injury Management Organization (IMO), it administers injury claims and develops strategies to ensure that injured employees return to safe and productive employment as promptly as medically feasible. Crystal is one example of how the city takes care of its own.

When asked about IMO’s relationship with City of Dallas, the company’s President, Catherine Benavidez says that one reason for the successful partnership, is they both share a similar philosophy. “The Mission of IMO, now 29 years in business, is to take care of its people and serve them with the best quality medical care and superior customer service.  Our Health Care Network has partnered with the City of Dallas for the past 11 years. The IMO Med-Select Network is organically grown, has highly credible results, and is built for performance. I am proud of the work our extraordinary managed-care team has done with such a great City!”

Dallas, with a population of more than 1.3 million residents, is the third most populated city in Texas, and the ninth in the United States. With an operating budget of $3.6 billion and 13,000 employees, the City of Dallas ensures that all vital aspects of the city’s daily functioning continue to operate smoothly. These employees range from first responders like police officers and fire-rescue officers, to librarians, road-repair engineers, and building inspectors.  Many of these jobs pose extraordinary risks, even with the city’s top-notch safety measures. When those injuries occur, the city’s workers’ compensation section locks arms with the IMO health care network to channel the most appropriate medical services and recovery strategies that promote early recovery and effective return-to-work for those injured employees.

Immediately upon receiving notice of the shooting, Melissa E. Veronie, a Registered Nurse and Medical Case manager Consultant with IMO, leaped into action. Within hours, she was at the hospital to meet with family and hospital staff, representing both City of Dallas and the IMO network in her unique role. “I was there for anything Crystal and her family needed from the City or from IMO,” she said. “The goal was to fully support her treatment and recovery.”

As Crystal’s survival began to look imminent, Melissa’s plan shifted to coordinating all rehabilitation services recommended by her doctors. “Because of my role, medical background and close rapport with hospital staff, I was able to attend all physician appointments and to anticipate and plan for Crystal’s changing needs and medical care. These included medical services such as physical, occupational, and speech therapy, and the Baylor Day Neuro Program. Overall, Crystal’s desire to return to work made a huge difference in her successful transition to the department.”

Jennifer Kramb, who works for Zeronda Smith in the Office of Risk Management, teamed up with Melissa to pave the way for Crystal’s return. “We had a great working relationship,” Melissa said of Jennifer. “She made possible the availability of light duty, and then full duty with some restrictions for Crystal, especially since she had also lost vision in one eye.”

Crystal’s words at the award ceremony tell so much about this fine officer. "I look forward to the knowledge I get every day,” she said. “And the thing I like the most, helping people. There aren't enough 'thank you's' I can say to everyone."

Crystal, the City of Dallas and all of Texas thank you for your character and relentless spirit of service.  We salute you for your courage.

Are You Prepared for the Coming Silver Tsunami?